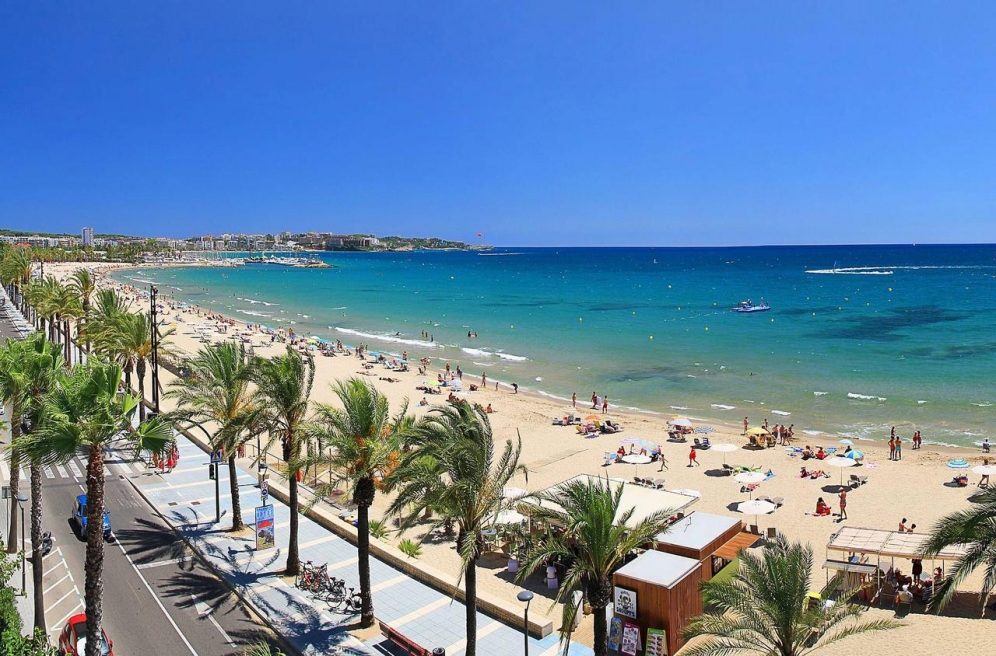 Costa Daurada is a real paradise for those who love endless golden beaches with fine sand resembling placers of gold and precious stones. Costa Daurada is translated from Catalan as "Golden Coast". It stretches for 140 km from the town of Vilanova i la Geltrú, which is west of Barcelona, to the lagoons and rice fields of the Ebro River Valley. Costa Daurada got its name thanks to the beaches with fine golden sand, many of which are marked with the Blue Flag. The magnificent golden beaches attract tourists from all over the world to go for a tour to Costa Daurada.

If you look at the map, you can see that from the west and north the Mediterranean coast is well protected by the Pyrenees and the picturesque Catalan mountains. Such a natural defense not only decorates the landscape but also creates a wonderful stable climate on the island - a lot of palm trees, pine trees, and cypresses confirm this fact. Thanks to this, the weather is good in Costa Daurada from March to October, and therefore vacationers come there almost the whole year. Swimming in the sea begins in mid-May. In the middle of summer, the sea warms up to 22-25 °С, the air temperature in July-August is about 33 °С.

This Gold Coast has turned into a center of tourism and recreation due to favorable climatic conditions and the favorable geographical location of the island. All that contributes to the wide popularity of this resort. Multistory hotels are increasingly absorbing cozy, small hotels on the coast. Motorists with wagons and tents strive to the Costa Daurada resort, enchanted by huge and well-equipped campsites near the sea line. In restaurants, discos, attractions, in giant shopping complexes and various water parks, you can realize all your dreams and have a great rest in Costa Daurada!

If the eastern and central parts of the coast are crowded, then the beaches in the Ebro Valley even in season amaze with their desert and a feeling of complete loneliness among the sand dunes. One of the reasons why tourists with children come there with pleasure is PortAventura Park, the largest park in the south of Europe. So, summer holidays in Costa Daurada suit any taste.

The beaches on the Costa Daurada are long, wide, with fine golden sand and clear water; the quality of the maintenance of many of them is marked with the Blue Flag of the European Union, which is a recognition of the highest quality. Add to this beauty free toilets and showers, rental of beach equipment, opportunities for outdoor activities, a variety of cafes, bars, mobile diners on wheels - and it will become clear why the coast is so popular.

All the beaches of the Costa Daurada are municipal; admission is free. You’ll just need to pay for the rent of sun loungers, umbrellas or beach mats. On average, it costs 10-12 EUR.

The center of beach infrastructure throughout the Costa Daurada is the small town of Salou. There are several beaches at once, and, which is rare for these places, some of them are separated by impressive rock walls. During the season, many vacationers and locals occupy each part of the sandy coast of Salou, but the most popular is Playa de Levante with green palm trees on a beautiful boardwalk, chic hotels, expensive restaurants, and affordable eateries. The famous singing fountains and other attractions of the Costa Daurada are within walking distance. And there are just a few kilometers to one of the largest amusement parks in Europe - Port Aventura.

The beautiful and relatively secluded La Pineda Beach lies a little north of Salou, about 15 kilometers away. On the contrary, Cambrillas beach is one of the busiest tourist destinations in the Costa Daurada, full of hotels of all levels located in the first and second lines. This beach is located in the town of the same name. It is very long, for the most part. Its length is quite wide and spacious.

Calafell Beach, 34 km east of Tarragona, is a place for parties of Frisbee fans to compete in it. The most western beach of the Costa Daurada - "Riumar" in the El Garksal nature reserve, attracts with beautiful sand dunes. Besides, there are nudist beaches on the coast, for example, La Marquez in Deltebre, Thorne near Vandelos, Savinos in Tarragona. True, most of them are deprived of any beach service.

With the onset of darkness, life on the Costa Daurada does not stop. Numerous discotheques, bars, restaurants, and nightclubs of the "golden coast" are open until morning. Vacationers are given the opportunity not only to appreciate the original dishes from the chef but also plenty of dancing. Many nightlife venues host club parties, music or dance shows and competitions.

The most popular Costa Daurada discos are in the cities of Tarragona, La Pineda, and Salou. In each district, there are several discos. So, during one night you can visit two or three different show programs at once. In Costa Daurada, it is difficult to find a nightclub or disco with the same genre. Almost all of them offer many different styles: disco, pop, RnB, hip hop, Latino, jazz, house, and many others. Therefore, completely different age categories of vacationers can find a place to stay at night.

The most famous and even legendary disco of the Costa Daurada is considered Pacha (La Pineda). For over 25 years, grandiose show programs have been taking place there. Such stars as Bob Sinclar, David Guetta, Tiesto like performing there.

Cambrils, Tarragona and Salou are recognized as the most popular and famous resorts due to their proximity to the PortAventura theme park. There you can visit five different corners of the world with many attractions, colorful national folklore, and delicious national cuisine.

Cambrils, formerly an old fishing port, and now it is a beautiful resort with 10 km of well-groomed gentle beaches. The main advantages of this resort are the clean sea, beautiful beaches and a relaxing holiday, perfect for a family vacation. The area is conditionally divided into three parts: historical, with old houses in medieval quarters; port, with hotels, entertainment centers. The city successfully combines national traditions and modern tourist chic, which attracts vacationers.

Salou is the tourist capital of the Costa Daurada, 100 km south of Barcelona. The wide beaches of this resort stretch from Cape La Pineda in the north to the resort town of Cambrils in the south. From May to mid-October, life on the coast does not calm down: there are thousands of tourists on the streets, everywhere you hear the clink of glasses with sangria, everywhere you can hear the aroma of paella. The most beautiful promenade alleys with numerous bars, restaurants, cafes, and shops stretch along the 8-kilometer-long beach. And the light and music fountain is rightly called the most beautiful one on the coast.

Tarragona is the capital of the province of the same name in Southern Catalonia with a long history and a list of architectural monuments of UNESCO World Heritage. This relatively calm, almost provincial city with a unique ancient history will be able to conquer everyone who loves national holidays and festivals, the golden beaches of Costa Daurada and unique cuisine in the best Catalan traditions.

Airlines: Many airlines flying to Costa Daurada, including both budget and conventional airlines. We will always offer you the best price to buy flight tickets to Costa Daurada.
Airport: Reus Airport, Barcelona El Prat Airport
Distance from airport: about 15-20 minutes / 9km
Flight time: 6 hours.
Language: Spanish
Timezone: Central European Standard Time
Population: around 27.000
Passport: Valid passport is mandatory.
Currency: Euro
Tipping: Not included. Customary to up to 10% of the bill.
Electricity: In Spain (230 V 50 Hz; power plugs and sockets are of type F)
Seat only: to book seats only – please find our link to great fares: www.aventura.is
Tourist tax: In Spain, tourist tax is included in the hotel price.
Water: Safe to drink, but it may taste not very good. So, we recommend that you drink bottled water.

1. Scream in fear at the crazy rides at Port Aventura. This is a grand amusement park for every taste, equipped with a whole complex of various attractions, a modern water park, restaurants, cafes and hotels. The Port Aventura Zone occupies a very large area on the Gold Coast in the city of Salou. This park is recognized as the main attraction on the entire coast of the Spanish Costa Daurada. Port Aventura is divided into six thematic zones: the Mediterranean, the Wild West, Mexico, China, Polynesia and the Sesame Street. Plunge into the atmosphere of each region in this park!

2. Get familiar with the underwater world and sunken vessels. This is a great way to diversify your stay on the Costa Daurada. The most interesting dive site is the Underwater Park of Tarragona, where 65-meter ship Dragonera, which enjoys the special attention of divers, is flooded. There is also an artificial reef, formed by several small ships at once and densely populated by doradas, barracudas, moray eels, squid and king prawns.

3. Go on an excursion to the ancient city, Tarragona. The modern Spanish resort of Tarragona in ancient times was part of the illustrious Roman Empire. We can say with confidence that all the surrounding peoples of antiquity visited it: Franks, Iberians, Celts, merchants of Ancient Greece and Carthage, Romans, Visigoths, Franks, Arabs, leaving reminders of themselves in the local culture, architecture and customs of local residents.