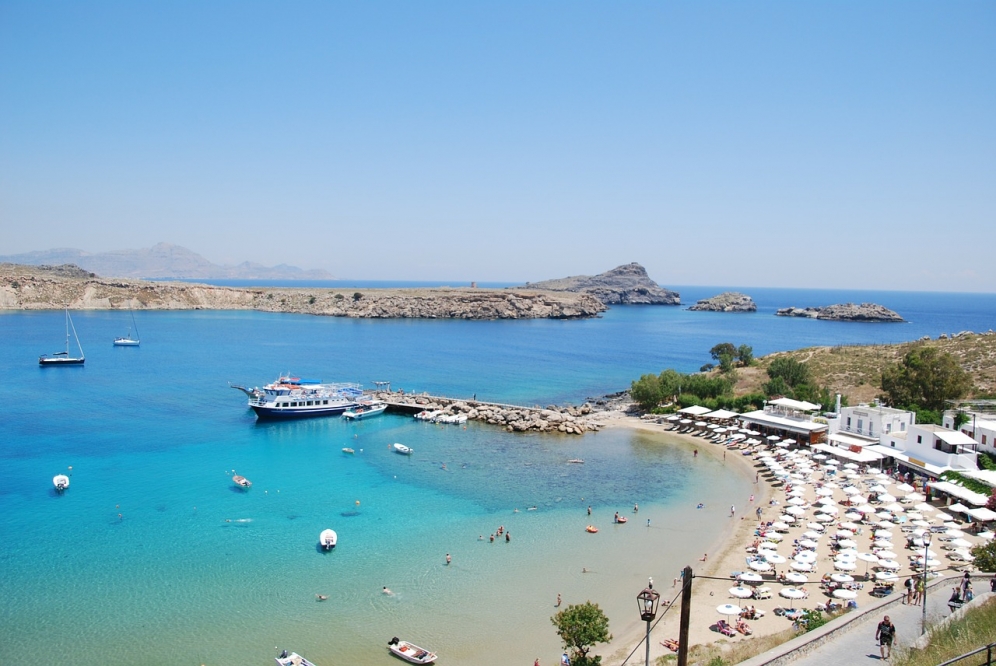 Rhodes is one of the most visited islands in Greece due to the fact that every tourist will find something interesting to visit, taste or see. The island of Rhodes is rightfully considered one of the most beautiful holiday destinations in Greece. Moreover, the number of sunny days exceeds 300 days per year to enjoy summer holidays in Rhodes to the full. Apparently, it is no coincidence that the patron of Rhodes was the God of the Sun. On the island of Rhodes, the climate is typically Mediterranean: freshness and coolness on hot days are brought by the northern winds. A mild climate, rich nature and ancient monuments attract millions of tourists today. All that is accompanied by European-developed infrastructure, hotel services, entertainment, and cordial smiles of local residents.

Rhodes is the third largest and largest Greek island of the Dodecanese archipelago. It is washed by the Mediterranean and Aegean seas, conveniently located at the intersection of sea routes. This is the most popular center for international tourism in the Mediterranean. People come here to enjoy its natural beauties and touch the centuries-old history.

The transparent sea washes the island and gives travelers a fresh sea coolness. Picturesque bays are true paradises that are hidden from prying eyes. Luxurious and outlandish herbs, sprawling lush trees - the island of Rhodes is incredibly rich in amazing natural creations. The island is of great value to the whole world: priceless archaeological finds, a huge cultural heritage, and incredible ancient artifacts scattered throughout the island. Modernity is surprisingly harmoniously combined with ancient traditions and customs. Modern and popular resorts, where nightlife boils and fun saturates the wide streets every day. city holidays and festivities thunder create the atmosphere of modern Rhodes.


From the west it is washed by the waters of the Aegean Sea, from the east - the Mediterranean. And you can not get past the features of the coastline of Rhodes, stretching for 220 kilometers. Despite the relatively small size of the island, there is a variety of beaches in Rhodes, where it will be equally good to relax both for inveterate extremals and sedate retirees. It is worth to note that the blue flag of the European Union flies on most of the beaches of Rhodes, symbolizing cleanliness and security.

The Mediterranean coast is ideal for a traditional beach holiday in Rhodes: the sea is calm, warm, sandy or sandy-pebble beaches. The Aegean coast is mainly chosen by lovers of water sports: waters are rough, the temperature is slightly lower, windy, the waves are high, and the beaches are almost completely pebble or sand and pebble. In the north-west, for example, the Ialysos beach is located. It is popular with surfers and sailing fans. And at the southernmost point, there is the Prasonisi beach, where the seas are connected, strong winds blow, which creates excellent conditions for windsurfing.

The waves on the Mediterranean coast are less even at the end of October when the season ends. In the West, it’s always a couple of degrees cooler, and this is important to keep in mind when planning a family vacation with children in Rhodes. On the other hand, it is on the western beaches that you can meet a romantic sunset.

It is difficult to choose the most picturesque Rhodes beach since they all deserve high praise. For example, you can start from Anthony Quinn Bay with the sandy and pebble beach, which very small but wonderful. The water is of an incredible emerald color, from which then you won’t want to go ashore. The water in the bay of Anthony Quinn is very warm, there are no currents, the bay is hidden from the winds. The water in the sea manages to warm up well in the sun. There are rocks on the shore that are occupied by sun loungers, which is quite unusual. You can even jump into the crystal clear water from some rocks. Boats are constantly floating in the bay - in general, the situation is conducive to cheerfulness in all its manifestations.

The longest beach of the island of Rhodes - Afandou - is located on the northeast coast near the village of the same name. This beach is famous for its endlessly charming landscape. The plain relief perfectly emphasizes the space, and only in the distance, the outlines of the mountains are visible.

As for excellent sandy beaches in Rhodes, go to Kallithea, located 8 km from the island's capital. Faliraki beach stretches even further - with soft golden sand, clear sea and everything you need for vacationers, including vacationers with children.

From the point of view of prices, all the beaches of Rhodes are the same - they are free (with the exception of Kallithea Therme, where the entrance costs 3€), and you can also stay on sand/pebble for free. But if you want to lie down on a deck chair under an umbrella, then as a rule (if this is not your hotel's deck chair), you will have to pay about 5€.


The island has a wide range of nightlife activities in racks, pubs, and clubs, which are concentrated mainly in the city of Rhodes, and in the tourist resorts of Faliraki, Lindos, and Ialysos. They are open all night until the morning to give tourists an offer of unforgettable nights.

The nightlife in Rhodes is active and diverse. Over 100 clubs are currently working on the island of Rhodes to delight tourists all night with modern and pleasant music, as well as the most delicious cocktails in Greece. And this clearly suggests that this island is one of the noisiest, fun and entertaining.

There are pathos and expensive establishments where you can meet famous personalities, listen to new music tracks, see the beauty and style of club culture. There are places where the availability of money or branded clothing does not matter, but the main thing is the desire to hang out all night and be ready for new exploits.

The island's capital, the fabulous city of Rhodes, has two opposite sides. The first one is a delightful medieval city, which is surrounded along the perimeter by high and ancient fortress walls. "Island of the Knights" - this is the name of Rhodes in ancient times. Some streets have retained their medieval appearance as if this part of the city still belongs to a different period of time.

The second side of the sunny island is modern and popular resorts, and city festivals thunder every two weeks on wide streets. Noisy discos and clubs, bars and casinos, countless shops and unique buildings - the atmosphere of modern Rhodes envelops and carries into the world of immense fun and celebration.

Moving from the south along the eastern coast, you should pay attention to Faliraki as the most active local resort. The nightlife here is in full swing, however, there are also enough family tourists, and all thanks to the excellent water park. Without such an active recreation center, it is difficult to imagine a full vacation on the sea! In addition, in the evening, after the heat of the day slackens, you can go to a small amusement park. Besides, the golden beach of Faliraki is considered one of the best in Rhodes. It stretches for almost 5 km. The beach is perfect for families with kids: the sand is soft, the water is warm and clean, there are practically no strong waves.

From Faliraki you can walk or drive to the neighboring bays - Anthony Quinn and Ladiko - crowded but very picturesque. A pedestrian path runs along very beautiful rocks, along the way you can look into the local observatory.

This is an ideal ratio of quality beach holidays and exciting excursions: local attractions can compete in their importance with capital's wealth. South of Lindos (from Lardos Bay to Plymiri) the best beaches of Rhodes begin - not so developed in terms of infrastructure as Faliraki or Ialyssos, but very picturesque and clean. This strip of beach paradise lasts almost 30 km, ending at the southernmost resort, which is washed immediately by two seas - Prasonisi.

Lindos is a magnificent resort with sandy beaches and picturesque lagoons, which provide great opportunities for various entertainments. There is everything for a wonderful holiday - comfortable hotel complexes and cozy private villas, chic restaurants and colorful taverns with an abundance of unrivaled local cuisine, numerous bars, and nightclubs, as well as a huge market where you can buy absolutely everything.


1. Try out different amusements on the island. In addition to picturesque beaches and natural areas, Rhodes is ready to offer its guests a huge selection of interesting entertainment venues. Vacationers with children should definitely visit Fantasia, which is suitable for families with children of all ages. This park and many others have a huge selection of attractions, as well as a large Ferris wheel, equipped recreation areas, and attractive cafes.

2. Hike. The area of ​​Rhodes is great for hiking. Cave of Fourni and Cave Archangel Michael Panormitis are considered one of the best places for eco-tourism, attracting travelers with their extraordinary beauty.

3. Study the underwater world being dry. A fascinating event will be a trip to the local Aquarium, which acquaints visitors with the diversity of the inhabitants of the underwater world. An interesting place to visit for the whole family is the Hydrobiological Station of Rhodes, located in the capital of the island, where various marine animals live.