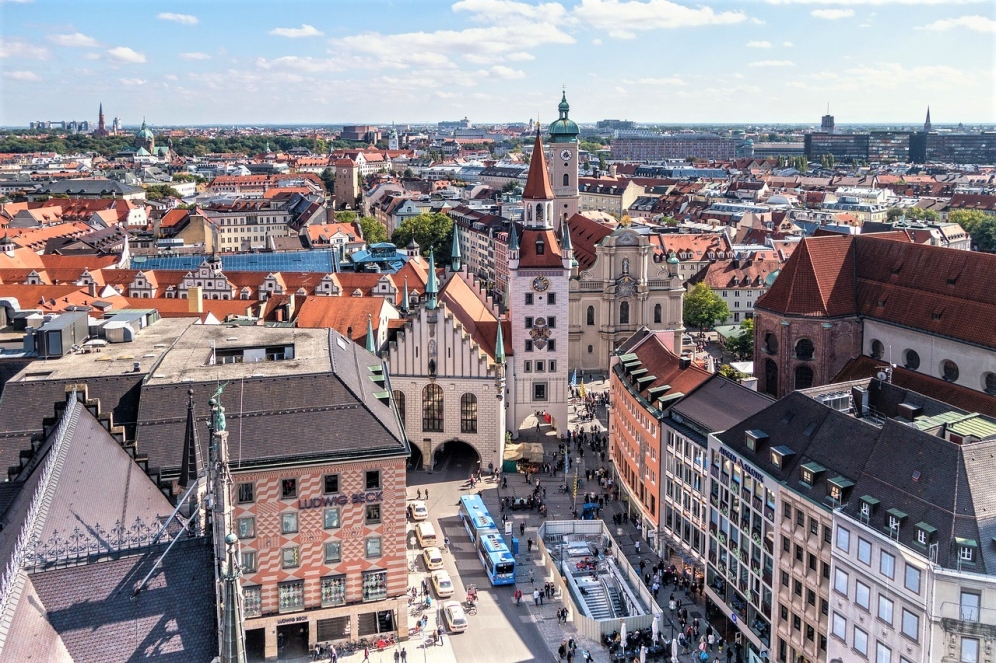 Munich is the pearl city of Central Europe, the capital of the federal state of Bavaria. It is located on the Isar River in the south of the country as a pie cut into two equal parts. Both have what to show while you are on the weekend tour in Munich. This is one of the most attractive in the region from a tourist point of view, with a rich history and cultural traditions.

The city is famous for the hospitality of its inhabitants. And many Bavarian holidays, which give visitors a lot of impressions, prove this fact. What is only Oktoberfest worth? A large-scale beer festival held every year at the turn of September and October on the famous Theresa's meadows (Theresienwiese).

In Munich, it is impossible to be disappointed - the number of restaurants of national cuisine and biergartens (beer gardens), pledging to feed several thousand visitors at a time. However, obsession with gastronomic pleasures does not prevent Munich from satisfying the aesthetic hunger of its guests in a quality manner. As an example: a tourist will have to spend a week to bypass museums and architectural monuments of Maxvorstadt alone (one of the districts).

The weather in Munich is quite variable, which is determined by several factors. The city lies in the intermediate region between the humid Atlantic and dry continental climates, on the one hand, and on the other, the nearby Alps play an important role, from where the unstable but rather warm foehn wind blows, which can dramatically change air temperature in a few hours. Winter in Munich lasts from December to March, but heavy rains are not so frequent here. The coldest month is January with an average temperature of -1°C. Snow covers the city from strength for a couple of weeks. In summer, Munich is quite warm - from May to September, the average temperature is at around 20°C.

Each tourist, planning a tour to Munich, invariably asks a set of questions: What is necessary to see in Munich? Where to go first and where to spend time free from excursions in Munich?

This is a city that combines the modern trends of a metropolis with the cultural values ​​of a rich historical past. So, it is better to start exploring the city with its historic old part. The heart of Munich is the Marienplatz square. Its main attraction is the column of the Virgin Mary (Marienzoyle), which has been considered the patroness of Bavaria for several centuries. In the northeastern part of the square is Fischbrunnen - a fountain that especially attracts tourists during the summer holidays in Munich to refresh themselves a little. Besides, you can drop coins into the water to attract wealth and good fortune.

The New Town Hall and the Old Town Hall on the Marienplatz are the very picture of the new and old traditions of Bavarian culture. Visit this place as from the height of its tower you’re given a wonderful view of the surroundings of the Old Town. Moreover, the great performance with 32 dolls is presented on the balcony of the Town Hall every day at 11:00 and 12:00 hours, and from March to October at 5 p.m. additionally.

If you go on for family holidays in Munich, what should you see to make it interesting for both children and adults? The Old Town Hall houses the Toy Museum where a huge collection tells the story of toys over the past 200 years.

What a tourist should visit for the first time in Munich is the Odeonsplatz square. The Munich Residence on Odeonsplatz impresses with its art galleries, and a collection of royal jewelry is exhibited in its Treasury. After visiting numerous attractions, you can relax in the cozy restaurants, pubs and coffee shops located in the old part of the city. Delicious Bavarian dishes are served there, such as classic white sausages, pork shank, and other culinary delights. But the main magnet for citizens and tourists is the world-famous Hofbräuhaus - a beer house. This is another attraction of Munich, where there is something interesting to see and try. Visitors are served with local culinary delicacies, along with delicious beers of various sorts from their own brewery.


At first glance, Munich may seem to tourists a quiet city, where there is no nightlife. However, locals spend evenings not only in front of a TV or computer. Munich is a great place for nightlife fans. The nightlife in the city usually starts at midnight. Until that time, biergartens - beer gardens attract people much more than any other evening entertainment.

The city has a huge selection of nightclubs, discos, and pubs. Many establishments have original decor and offer visitors a varied entertainment program. Atomic Cafe is a popular youth club where you can enjoy exotic snacks and dance. The only embarrassing factor can only be a huge number of visitors, especially on Fridays and Saturdays.

If you are a nightlife lover and stay up late at a nightclub or disco, bar, restaurant, you don’t have to worry about how you get home. In Munich, you can get by public transport practically from anywhere at night, as it works around the clock.


There are no special problems with shopping in Munich - many modern shopping centers, world-famous brand boutiques, various small shops and, of course, seasonal sales. All this akes the capital of Bavaria a very attractive place for those who like to leave their money at the box office of department stores. Munich is known and loved by shopaholics not only in Europe but throughout the world. And if Milan, Paris, and London are primarily centers of high fashion, then Munich is famous for its affordable prices and a wealth of choice.

For shopping in Munich, there are several main streets designed just for this good activity. The main trade arteries of the city are Kaufingerstrasse, Maximilianstrasse, Neuhauserstrasse and several others. You can find both super-expensive boutiques of elite brands, as well as more affordable options.

Opening hours largely depend on the location and type of outlet. In general, stores are open Monday through Saturday from 9:00 to 18:00 (on Saturday until about 16:00). The main sales in Munich, as well as throughout Germany, are two: in winter and summer. Winter sales start in late January and end in February, and summer sales last from late July to early August. Discounts, as a rule, reach 50%, but in some outlets, they can reach even 70%.

Mind that discounts on democratic goods in Munich begin earlier than on designer clothes and shoes. As a rule, expensive boutiques begin to actively sell out-of-date collections only after the New Year holidays.


Airlines: Several airlines operate to Munich from any part of the world, including the USA, Europe, etc. We will always offer you the flights to Munich at the best prices.
Airport: Munich International Airport
Distance from Airport: about 45 min (about 40 km)
Language: German
Timezone: Central European Time Zone[
Population: around 1.4 mln
Passport: Valid passport or visa is mandatory
Tourist visa: Not required for stays under 90 days
Currency: Euro
Tipping: Not obligatory, but very common to give 5-10% of the bill.
Seat only: to book seats only – please find our link to great fares: www.aventura.is
Tourist tax: 5% of the room rate
Water: Tap water is safe to drink in Paris
Electricity: 230 V 50 Hz, power plugs and sockets of type F


1. Explore the city by bike. Munich is small and cyclist-friendly. There are rental points at every step, and for 18-20€ you can travel around the city all day. Start with Karlsplatz, admire the Palace of Justice, the Bavarian court and the “disappearing” fountain, and then through the Charles Gate leave for Kaufingerstrasse. Turn left - and in front of you, there is the Frauenkirche, the highest cathedral of Munich. Just a couple of minutes - and you are at Marienplatz, in the heart of the city. Do not confuse the New and Old Town Halls: the first looks older only because of the skillful imitation of architects in the Gothic style. After the square, turn right - you will get to Viktualenmarkt. It is worth making a pit stop in this market: have a bite to eat with fresh products and choose souvenirs. Then with new strength and a sense of accomplishment, continue the bike ride around the Old Town.

2. Taste the local beer. If you don’t try beer in Munich, you don’t know what Bavaria tastes like. If you are lucky to be in the city at the end of October – beginning of November, go to Theresa meadow, where Oktoberfest has been making noise and foaming for two hundred years now. For such an event, they brew a special beer, Oktoberfest Bier. It’s good to quench your thirst after a bike ride with Radler (literally from German, “a cyclist”). This is a refreshing cocktail in Bavaria made from light beer and lemonade.

3. Touch upon science and technology at the Deutsches Museum with about 28,000 exhibited objects. The largest technical museum in the world occupies an entire island on the Isar River. The main principle there is interactivity: exhibits can and should be touched. To evaluate an exhibition, it is not necessary to be tech-savvy. Look at the airships and the submarine in section, find out what the first space “capsule” was, go down into the mine and climb inside the giant guitar to understand how the strings sound. If your children do not like to study, take them to this museum: physics and chemistry are much more fun there than in textbooks.