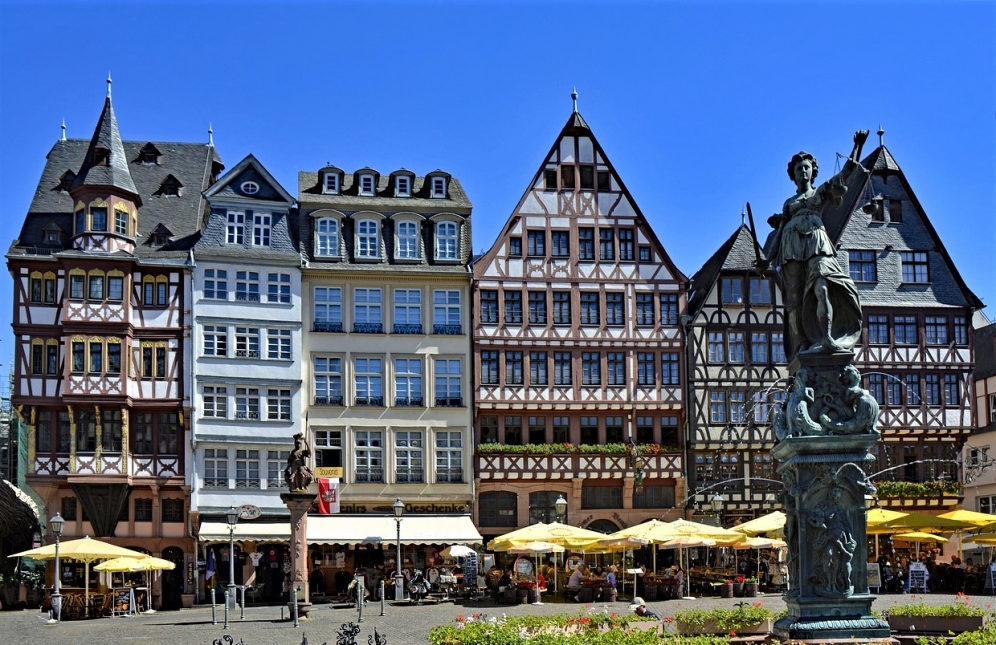 Frankfurt is the largest economic center in Europe. It is located on the banks of the River Main, in a place where there was a ford (in German "furt") in ancient times. In that distant era, the local population was made up of Franks, which led to the name of the city, which translates as "ford of the Franks on the River Main".

Today, this is the most technologically advanced and modern city in Europe. For example, it has the tallest and most modern skyscraper in Germany - Commerzbank Tower. By the way, this isn’t the only bank located in the city. Frankfurt is a city of financiers, which is jokingly called "Bankfurt". 200 years ago, Rothschild opened the first bank there, and today there are about 400 of them. Frankfurt has more skyscrapers than the rest of Germany combined. Moreover, it has one of the largest airports in Europe where every minute a plane takes off or lands so that more and more people could spend great tours in Frankfurt.

In Frankfurt. there are always many tourists who get real pleasure while admiring the beauty of this city. Mirrored skyscrapers of Frankfurt coexist with small medieval houses, which creates an amazing and at the same time harmonious combination of different historical periods. The climate in the city is temperate continental, so the summer is always warm and sunny, and the winter is almost snowless and relatively comfortable. The end of spring and the beginning of autumn is perhaps the best time to stay in Frankfurt when the weather is almost without precipitation. It was at this time that the city had a large number of tourists, and the prices in hotels are the highest ones. In addition, most low-cost accommodations are fully booked until the end of the warm season. For that reason, take care to book a hotel in Frankfurt in advance.


The historic center of Frankfurt is located on the left bank of the Main. It is lined with picturesque half-timbered houses that form the familiar, “burgher” commercial appearance of the city. In taverns, you can taste traditional apple wine and Frankfurt sausages with a green sauce of seven herbs - a unique culinary invention of the region.

In its central part, on Römerberg, there are many monuments that attract tourists' interest. On the southern shore, there is a magnificent forest, Frankfurt City Forest - the largest one in Germany among those that are located in the city limits. So, not everything there is built of glass and concrete. For example, the cozy and picturesque Alt-Sachsenhausen district is an old Germany in all its glory. It’s even amazing how in this city of brilliant skyscrapers and modern office centers such a corner of the old German province in its best manifestation was saved. In fact, there is hardly any building there, as, indeed, in the rest of the city, older than 50 years as they were thoroughly restored after World War II.

The Frankfurt Old Bridge connects Alt Saskenhausen with the Old Town that also serves as a good attraction for tourists. Directly beneath it, practically in the center of Main’s full-flowing channel, there is the island of Maininsel. This small piece of land, overgrown with willows and inhabited by migratory birds, is approximately 300 m long and only 30 m wide. From the west, Maininsel is crowned by the work of the architect Christoph Mackler, a modern building where various exhibitions are constantly held.

Well, how to be on the trip to Frankfurt - a financial center of Germany and not to go to the financial district? This is a modern city block built up with skyscrapers. Here is the headquarters of the European Central Bank and the main offices of other financial organizations. The most famous high-rise buildings of the quarter are Commerzbank Tower 259 meters high, Messeturm 256 meters high and Main Tower 200 meters high. Some skyscrapers offer free access to the upper floors where there are restaurants and observation decks.

Besides all architectural merits, there is a real natural paradise in Frankfurt - Palms Garden located in the southeast of Frankfurt. This botanical garden is considered one of the best not only in Germany but throughout Europe. It is no wonder: where else on the territory of 22 hectares can the flora of almost the whole world be accommodated? Two hours of walking can give an idea of ​​the plant world of the Earth abruptly than any trip around the world. Besides, it is ideal for a relaxing family holiday in Frankfurt.


In the city, you can have a great time not only during the day. Nightclubs in Frankfurt amaze visitors immediately as the sunsets. Frankfurt is famous for its vibrant nightlife until dawn. Visitors are invited to numerous bars, pubs, and nightclubs. Fans of evening entertainment come here from all over the world. Some are attracted by the lights of dance floors in clubs in the techno style, while others prefer to plunge into the atmosphere of jazz bars. You can visit the best of them by going to Kleine Bockenheimer Strasse, also known as the Jazz Walkway, in the evening.

Those who come to Frankfurt for the first time are recommended to start with the Alt-Sachsenhausen area. There are many bars serving traditional local apple wine. You can visit one of the bars located on the roof, and sip a cocktail there, overlooking the German "Manhattan" that is spread out below. The Bornheim and Nordend areas are also popular for nightlife enthusiasts. It is filled with numerous clubs, where there is a vibrant and vibrant atmosphere that attracts DJs from around the world. Arriving in this amazing city, they are happy to play on weekends in the largest clubs in the city.


It would seem that this German city cannot offer you such a variety that can be found in Milan or London. But still, in Frankfurt, there is where to go and what to buy, at the same time, at a very affordable price. We recommend starting a shopping tour in Frankfurt at Hauptwache, Konstablerwache, and Schillerstrasse. These shopping streets have many trading houses and department stores, freestanding shops and markets.

For those who are a true pro, it will not be a secret that the best prices are in the outlet near Frankfurt. In the vicinity of the city, there is a whole boutique village where you can find branded items at affordable prices. Getting to her is not so difficult. This is Wertheim Village and in just an hour and a half, you will get there.

For those who certainly need to bring souvenirs for all friends and acquaintances, shopping in Frankfurt in the city center is suitable. For example, on the eve of the Christmas holidays, Zeil shopping street is like one large souvenir shop, which shimmers with all kinds of lights.

Tourists should be prepared that shops are close relatively early. On weekdays, small outlets are open until 19:00 or 22:00, shopping and entertainment centers close at 22:00. On Saturday, the store’s working day can be reduced to 16:00, and Sunday is considered a bad day for shopping because only the largest retail outlets and some shops remain open.


Airlines: Several airlines operate to Frankfurt from any part of the world, including the USA, Europe, etc. We will always offer you the flights to Frankfurt at the best prices.
Airport: Frankfurt Airport
Distance from Airport: about 15-20 min (about 13 km)
Language: German
Timezone: Central European Time Zone
Population: around 740.000
Passport: Valid passport or visa is mandatory
Tourist visa: Not required for stays under 90 days
Currency: Euro
Tipping: Not obligatory, but very common to give 5-10% of the bill.
Seat only: to book seats only – please find our link to great fares: www.aventura.is
Tourist tax: 5% of the room rate
Water: Tap water is safe to drink in Paris
Electricity: 230 V 50 Hz, power plugs and sockets of type F


1. In addition to the traditional sightseeing of the central square of the old town of Römer and the Frankfurter Dom cathedral, shopping on the main shopping street Zeil and a walk between the local skyscrapers, there are many more exciting ways to spend your free time in Frankfurt.

2. Take a journey along the river. On the promenade, you can meet a moored small boat that runs all over Mine. If you do not want to be on the deck, then through the large panoramic windows, you can watch the “running” shore - silhouettes of banks, the business center of Frankfurt, beautiful villas, magnificent buildings, and architecturally interesting buildings. An alternative to a boat trip can be a regular walk along the river. If the day turns out to be warm and sunny, then you just need to walk on both sides of Maine. Look at the rowers that arrange training on the water, or go to the museums, which are located in large numbers on the left bank of the river.

3. Enjoy family holidays in Frankfurt. A great way to spend a couple of hours is going to the local zoo, especially if you come with a child. You cannot call it big, but it was built interestingly and wisely. No way to get lost there. Near each enclosure, different playgrounds and information desks are built. Some animals walk around the park without any obstacles. Monkeys are particularly impressive as they live right on the street and are separated from visitors by only a shallow moat. For lovers of marine life, there is a large aviary with seals and fur seals that can cause tenderness in the most callous person. And if you are lucky to get to their feeding, which takes place twice a day (at 10:45 and 15:15), then you have a chance to watch a whole performance worthy of a show in the dolphinarium.

4. Take a good shot of the entire Frankfurt. Go to the Deutschherrnbrücke railway bridge or to the more central Altebrücke - there you will be able to capture the landscape in all its beauty.