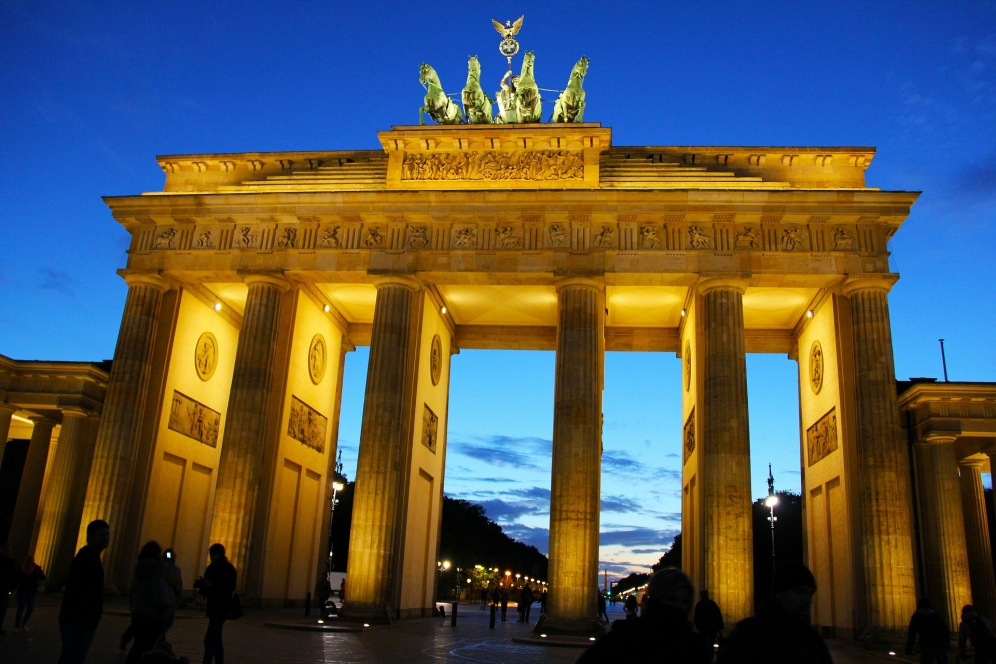 Berlin is a modern metropolis, democratic, which at the same time is a cozy town in the
center of Europe.

As a real metropolis, Berlin instantly captures in the cycle of events as soon as you step on the platform or exit the airport. This is a hospitable, clean and welcoming city, from which you don’t want to leave, but after leaving, you’ll immediately want to return.

Berlin is a city with a difficult history, and therefore rich in attractions. The rich cultural heritage of Berlin is represented by many historical monuments, museums, and galleries. It is perhaps impossible to fully understand and feel Berlin in one visit. You need to come here at least twice, at different times of the year. Summer holidays in Berlin are fun-filled - you can enjoy the beauty of city parks, flower beds, ponds, and lakes, sit in cozy summer cafes. In winter it is truly a fabulous town with noisy Christmas markets and colorful garlands. Be sure tours in Berlin will leave unforgettable impressions for young and adult
travelers!


What to visit in Berlin?

In Berlin, there are many places worthy of visiting because the city has a long history. Despite the last two devastating world wars, the city has preserved many historical sights. Berlin is like an open history book - everywhere you can find references to history. This is exactly the case when you should not neglect historical facts as they will help to better understand the city.

Mitte is considered the heart of the city - here is the largest number of buildings having historical value. The construction of Berlin began in this area in the 12th century. It is that place where the Brandenburg Gate, the Reichstag, and other significant Berlin places are located. The best way to get to know Mitte is by walking or cycling. Despite the rather severe traffic, the city has a lot of marked tracks, parking spots for cyclists and rental offices.

Go to the Brandenburg Gate. This is the most recognizable Berlin landmark that marked the construction in the so-called Berlin classic style. It is located in the heart of the capital of Germany and adjoins the legendary Linden Alley, which connects the gate with the former royal residence. It is also one of the tallest buildings on Paris Square, its height is more than twenty-five meters.

View Berlin from the Reichstag’s dome. The visit is free, you only need to pre-register on the site or in the pavilion near the Reichstag. A great panoramic view of the whole of Berlin opens from the dome, and an audio guide talks about all the significant objects.

Learn the history of the Berlin Wall on Bernauer Strasse. Today, it consists of a museum and the remains of a wall. The museum contains photographs, personal stories of people who survived that time, eyewitness accounts. Admission is free; there is an observation deck at the top. The wall is an integral part of the history of Berlin. Although a visit to the museum doesn’t cause joyful emotions, it will allow you to immerse yourself in the atmosphere of those awful events.

The impression of Berlin remains incomplete if you do not try the taste of its nightlife. The capital of Germany is rightfully considered the center of European club life, and especially of electronic music. The unique atmosphere of fun and celebration is until the morning in Berlin. Famous DJs and musicians, dance groups come from all over the world all year round.

There are 200 clubs in the city. Entrance and drink prices are quite low. Compared to other European cities, they are more affordable, entry prices range from 4 to 10 euros. Clubs are located mainly in the eastern part of the city. Several mainstream clubs are located in the Charlottenburg district and at Potsdamer Platz. A distinctive feature of Berlin is the round- the-clock access to public transport. This makes an afternoon break even more carefree.

Club parties are held on Thursdays, Fridays, and Saturdays. Some clubs are completely open every day. Berlin parties start around midnight and last up to 2 or 3 nights, in electro/techno clubs - a little longer. The most persistent people can go to such clubs, where entertainment lasts from Saturday to Monday evening. Great music and new acquaintances are waiting for you everywhere, so it’s just not possible to spend an evening sadly. In Berlin, there was even such a thing as “Kreuzberg night” - the longest one of the year. And it can happen every week - you just need to go to a party on Friday and finish it by Monday morning!

Berlin can hardly be called a mecca for shopping lovers as opposed to Milan, Paris, and London. But in the past few years, this particular city has attracted more and more tourists who come not so much for cultural experiences or nightlife, but for shopping. Berlin is one of the largest European cities. So it is not surprising that the city has all kinds of temptations for shopaholics. They are offered from huge ultramodern shopping centers and luxury boutiques of top brands to “flea” markets and tiny shops selling antiques.

Kurfürstendamm is the largest boulevard in Berlin, a favorite place for shopping. The magnificent buildings erected at the turn of the century feature such exclusive brands. Another place where you can buy unique souvenirs is the flea in Tiergarten. The local market, where fans of antiques, vintage cards, second-hand and all sorts of absurdities flock, is considered one of the largest in Europe.

When planning, consider that shopping in Berlin on Sunday is unrealistic, since no store is open on this day of the week. It should be noted right away that on Sundays almost all stores, even grocery, are closed. On other days, most stores are open from 10:00 to 20:00, although some may be open an hour earlier. During the Christmas season shopping centers are open until 22:00.

As for discounts, you can get them in summer and winter. Summer sales start on the last Monday of July, winter ones start on the last Monday of January, and each of them lasts for two weeks. Keep in mind if you plan a trip to Berlin for other dates, discounts and sales are not only in those periods. Pay attention to the store windows with signs "Reduziert" and the traditional "%" and "Sale".

Airlines: Several airlines operate to Schönefeld from any part of the world, including the USA, Europe, etc. We will always offer you the flights to Berlin at the best prices.
Airport: Berlin Tegel Airport and Berlin Schönefeld Airport
Distance from Airport: About 20-30 min (about 12 km)
Language: German
Timezone: Central European Time Zone
Population: Around 3.7 mln
Passport: Valid passport or visa is mandatory
Tourist visa: Not required for stays under 90 days
Currency: Euro
Tipping: Not obligatory, but very common to give 5-10% of the bill.
Seat only: To book seats only – please find our link to great fares: www.aventura.is
Tourist tax: 5% of the room rate
Water: Tap water is safe to drink in Berlin
Electricity: 230 V 50 Hz, power plugs and sockets of type F


Things to do in Berlin

‘Get lost’ in Tiergarten - a huge urban park in Berlin. This is not common to see a huge forest in the middle of the city. Former hunting grounds were turned into a park, where you can easily spend the whole day. Go jogging, ride a bike, rent a boat, and just lie on the grass - the perfect plan for weekends in Berlin. Wandering along the paths and paths of Tiergarten, you can find not only a variety of sculptures but also, if you're lucky, to meet rabbits. At the end opposite the Brandenburg Gate, the park houses a zoo, one of the oldest in the world.

Go to a Berlin TV tower. It can be seen from almost anywhere in the city. The height of 368 m makes it the tallest building in Germany. Tourists can look at the city from an observation deck at 204 m, inside there are also a bar and a revolving restaurant.

Try traditional German cuisine. Basically, it is impossible to be hungry in Berlin - meat-eaters will be especially pleased! The cuisine is rich in meat dishes. Eisbein(pork knuckle boiled in beer), Berlin chop, deep-fried rib-bacon, Eintopf (thick soup with smoked meat products), grilled sausages with sauerkraut and braised cabbage with curry - all this can be ordered in almost any cafe.

1. Berlin surpassed the "city on the water", Venice, in the number of crossings over water bodies and channels. If you ask any traveler with the most bridges in European cities, most will name Venice. It turns out that this is not so true. There are more than 1700 bridges, many of which are monuments of architecture. Bridges are known to be the best places for dating, so go ahead to Berlin!

2. There are fewer rainy days in Berlin than museums! The local population with humor says that there are many more museums in Berlin than the days of the year when it rains. 180 museums of different directions are located in the city. If you suddenly want to have some fun on a rainy day and visit all the museums, then, unfortunately, you will not have enough cloudy days for such an activity.

3. Berlin Zoo is leading in the world in the number of animals. Today, there are about 1,500 species of animals, while the total number of inhabitants exceeds 17 thousand individuals. Because of the division of the city in the past, two zoos operated in Berlin. They still function in different places of the city and both are open to visit during tours in Berlin.