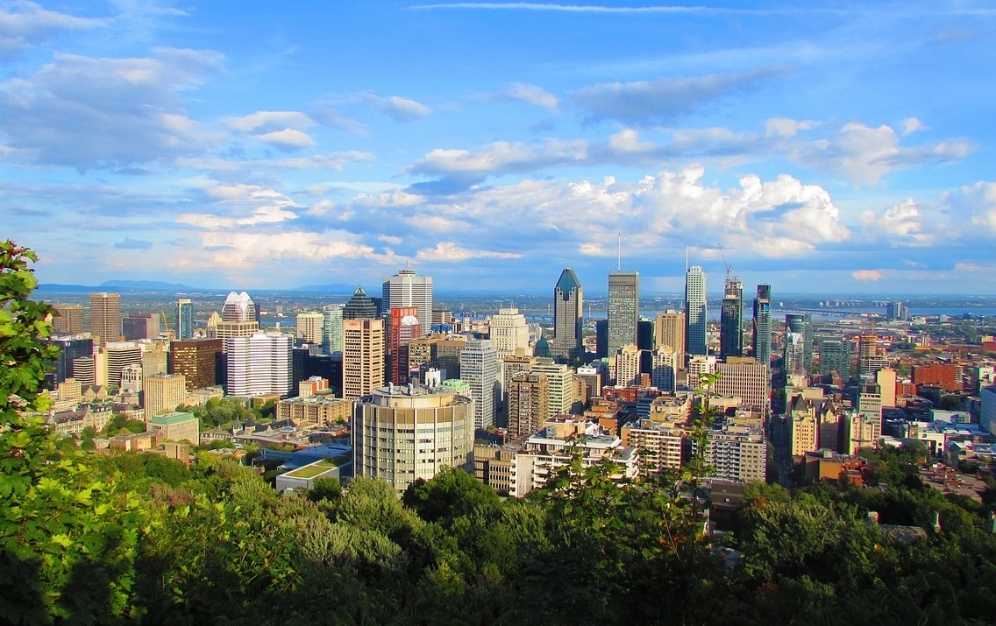 Montreal is Canada’s second-largest city, spread across many river islands in the province of Quebec. It is a city of old mansions and cobbled streets, modern skyscrapers and picturesque parks. The city owes its name to the hill of Mont-Royal, whose name translates as "Royal Mountain". Today, this place is a symbol of the city. On its top, there is an unusually beautiful park of the same name and the famous 70-meter Catholic cross. By the way, a magnificent panorama of the city and its surroundings comes off the mountain.

This city is known for a wonderful mixture of French and English history and cultural ties dating back to the time of the first European settlements of 1642. More than half of the population consider French their mother tongue, all the inhabitants are bilingual, and this gives a special charm to a lively city with an international character.

The climate in Montreal is temperate that attracts many tourists around the year. Spring is short, and autumn begins in mid-August. Winters are snowy, but not very cold, summers are usually long and damp. From mid-June to mid-September the temperature does not drop below +20 ° C. The best time to travel in Montreal is autumn, which is mild, dry and long.


What to visit in Montreal?


Montreal is a fast-growing city with picturesque surroundings, which is very pleasant to walk around. The city stands on an island at the confluence of the Ottawa and St. Lawrence rivers. It is worth visiting the old town located on the banks of the St. Lawrence River, the Notre-Dame Bonsecours church (with an observatory), the Notre-Dame-de-Montreal Cathedral, the building of the Windsor Station (19th century).

To see the city spread before the eyes, start with an invigorating walk along the slopes of the beautiful Mount Royal Park. Climb the trail and stairs from the end of rue Peel or choose a shorter route from the Chemin Remembrance parking lot. But, probably, the most pleasant will be a walk in the park in a horse-drawn carriage. Mount Royal Park is rather a large hill than mountains, from where a magnificent all-round view of the city opens, surrounded by the immense St. Lawrence River. There are ponds where you can ice-skate in winter, as well as hiking trails, slopes for flat skiing and many corners where you can just sit, enjoying the flora and fauna of “la Montagne”, as locals lovingly call the park.

You can also visit the Botanical Garden (Jardin Botanique), where more than 26 thousand plants from around the world are collected. In the middle of the St. Lawrence River are the picturesque islands of St. Helena and Notre Dame. Many historical sites are located in the Old Port area.

Montreal is divided into districts, and each of them represents a unique part of a fabulous, hospitable city. There are many museums, including the fantastic Museum of Fine Arts. This area has long been called the Golden Square Mile due to the abundance of large and luxurious mansions built here by wealthy Scottish and English industrialists who have influenced the political and social life of Montreal.

Old Montreal or Vieux-Montreal is the oldest part of the city, where you can see Parisian-style street cafes, artists, musicians, and florist stalls. Saint-Denis is a bustling area with bistros, unusual boutiques, and art galleries. It is often compared with Saint-Germain-des-Prés in Paris, for this is the heart of French Montreal.

Along with all old buildings in the historical center of Montreal, the city can offer the modern life of residents. The area between Rene Levesque Boulevard and Sherbrooke Street, running parallel to the river and bounded by Guy Street and Saint-Denis Street, is the heart of Montreal. There are many skyscrapers built in modern and post-modern styles, cultural complexes and shopping centers that are interspersed with old churches, museums and round-the-clock grocery stores offering local delicacies.

Among the popular places in Montreal, there is a very amazing Underground City. In search of a cozy refuge from the snow, ice, and slush that reigns for five to six months of the year, and from the suffocating summer heat, the Montreal and guests of the city descend into the sub-city, into the labyrinth of shops, cinemas, night clubs, cafes, and restaurants.

In addition to the variety of excursion programs, Montreal can offer its guests wide prospects for organizing leisure activities. The Biodome de Montreal Center is a great place to relax for the whole family. It includes several museums, a small zoo, and a beautiful garden. Every day various entertainment events take place in the center; a separate entertainment program Biodome de Montreal offers the smallest visitors.


As in any metropolis, the nightlife in Montreal is very eventful: many clubs and restaurants are located on Saint-Denis Street, which is the center of the Montreal Latin Quarter, on Crescent Street. Popular youth clubs are also located near the territory of Concordia University. Montreal's extremely lively nightlife will delight true party-goers and amateurs. Regardless of the time of year, world-famous DJs, excellent cocktails and explosive music are waiting for you in the leading clubs. The favorite of local residents, of course, is jazz. Loud music invites visitors to the numerous bars of the unsleeping city.


Huge underground shopping malls are located under the squares and streets of Montreal. It is easiest to get to them from metro stations. Saint-Catherine Street, or “100 Shopping Street”, is the key point of all shopaholics who have arrived in Montreal. It is from here that you should start a shopping tour in the city. There are elite boutiques, outlets near the city, clothing and accessories stores, souvenir shops, cafes, and restaurants. The main thing is to manage to get around them all. On Saint-Denis street, there are also fashionable boutiques, as well as on Sherbrooke and Mont-Royal streets. So, you’ll find many shops and spacious department stores for every taste.


Airlines: Many different airlines operate from any part of the world. We will always offer you the flights to Montreal at the best prices.
Airport: Montréal-Pierre Elliott Trudeau International Airport
Distance from Airport: 40-50 minutes (15-20 km)
Language: French/English
Timezone: Eastern Standard Time
Population: around 1.7 mln
Passport: Valid passport and visa is mandatory
Tourist visa: Required depending on the type
Currency: Canadian Dollar
Tipping: Not included, but It is customary to leave 15-20% of the bill as a tip
Seat only: to book seats only – please find our link to great fares: www.aventura.is
Tourist tax: 3-7.5%
Water: safe to drink
Electricity: from 110 to 120 volts and 60 Hz; Plugs are flat pins


Things to do in Montreal


Montreal has a wide selection of activities attracting tourists from all over the world.

Try out the most incredible rides in action and have fun in La Ronde park. This is the largest amusement park in Quebec and the second-largest in Canada. It has many play areas for children of all ages and an excellent relaxation area for their parents.

Enjoy recreation on the landscape. Nature lovers will love the Saint-Lawrence Valley Ecomuseum. It is a place where both body and soul rest. There is also a small zoological garden on its territory with a lot of hiking trails pass through the picturesque valley. Not far from the city center is Biosphere Park, the main decorations of which are fountains and unusual metal structures. Despite the urban style typical of large cities, the park is perfect for sports entertainment and recreation with children.

Taste unique original dishes or apply to a large selection of street food. Among the dishes of national Canadian cuisine, you should definitely try Prosciutto e Melone - thin slices of cured meat served with melon, Carpaccio di Vitello - slices of raw beef seasoned with olive oil and spices, Antipasto Vizio - cold meats, complemented by seafood and fresh vegetables. There are inexpensive cafes and restaurants scattered throughout the city, but most of them are on Crescent Street and Saint-Denis Street. And, of course, the main trend of the city is street food. During the walk, you’ll come across cars that sell dishes of almost all cuisines of the world. Cheap, varied, delicious!


1. Montreal is home to the most famous circus in the world - Cirque du Soleil. It was founded in 1984 by two street artists and developed into an exciting show with unique characters performing incredible stunts. Undoubtedly, Cirque du Soleil made a revolution in this area and brought circus art to a new level. But, in fact, this is not the only circus of the city. In addition to numerous circus troupes, there is even a whole school in Montreal that reveals all the secrets of this craft.

2. In the province of Quebec, where Montreal is located, more than 85% of the world's maple syrup is produced and exported. This delicious Canadian treat is made by cutting maple leaves in order to collect all the juice from them, and then process it and get a concentrated sweet syrup with a unique taste.

3. In 2006, Montreal was included in a UNESCO World Heritage Site for its architecture, museums and overall artistic appearance. The Government of Canada strongly supports young talents, making Montreal a world-class city in the field of creative freedom. This allows you to develop walking routes, transport links and improve the appearance of the city, which pleases both local residents and all tourists!